The Power of Expectation

I am a dreamer and am very comfortable 'living in the mystery'... But I also have a science brain. My dad is a scientist, and I have a Bachelor's degree in Biology. I am able to change my beliefs when evidence proves to me I should, and I am able to trust in my beliefs even if science has not yet figured out a way to understand or confirm it yet. What I really love, is when science starts to prove something that I already knew to be true.

This morning while driving back from my long distance run, a lovely combination of post-exercise bliss, and caffeine from a really nice cup of coffee were flowing through my body. The car windows were down and the cool fall air (yes, even in Florida we get cool fall air) felt amazing. In this state my mind feels so clear, and my body so content... A program was on NPR (National Public Radio), and it immediately grabbed my interest. It was one of those shows that makes you sit in the car in the driveway, because you can't stop listening.

The program was about a lot of things, but really it was about how the power of our expectations can effect the people around us. It goes on to tell a story about a blind man (a man with no eyes) who ignored other people's low expectations and it has allowed him to see. That alone is a fascinating story, but the program started with a story about how people's expectations effected an animal's performance. (You were waiting for the part where I connected this to animals and horses, weren't you?)

The animal in this experiment was the rat, but it proved something that is a key idea in the way I train and teach. In the experiment, there were a bunch of 'normal' lab rats in individual cages. The scientist randomly labeled each cage either 'smart rat' or 'dumb rat' (not based on anything at all; they were basically all the same). Then other people were given a rat and were told to put it through a maze, and measure the results. The rats that had been labeled as 'smart' did way better than the rats who were labeled 'dumb'. Apparently it wasn't even close.

I have heard of experiements with humans, where if you tell someone they are good at something, they perform better than if you tell them it is going to be really hard for them, but I thought this experiment was even more interesting. The rats themselves couldn't have read the labels on their cages. They did not literally mind-read their humans and understand that they were thought of as dumb or smart. But the results were there nonetheless. So what is happening? It turns out that there were differences in the language and behavior of the handlers depending on which label the rat had. The expectation someone had in their mind, effected the performance of those around him, even across species!

It's scientifically proven to work!

I thought about my article The Hero 6: In Praise Of The Ordinary Horse, where I talk about how every horse is a champion and needs to feel that from us. I thought about how passionate I am about bringing out student's confidence by helping them trust their own instincts. I thought about the whole premise of my Finding The Sweet Spot protocol: It is based on the idea that for every horse, in every moment, in every movement, there IS a place that will feel the best and we just have to find it. There is an inherent positive expectation in all of that. The expectation of 'Of course you can do this!'

I also thought about other trainers and students I have heard in the past... Those that talk about their horses as 'untalented' or 'lazy' and how I often had the feeling that it was just their bruised egos that needed to blame their horses for perceived short-comings in the training. After all, if every horse is a champion but the training actually isn't going well, then they have only themselves to blame!

I guess I don't mind living in humble vulnerability. I know every horse is perfect at being a horse until I come along and ask it to do something it cannot do. In that humble vulnerability is the power of the positive expectation of the horse, and the need for a curious and investigative mind for myself: If only I search well enough, I can find the key to the horse's inevitable manifestation of his expected excellence!

Now of course for every great idea, there is a way for humans to mess it up... Some people use high expectations to feel bad about themselves. If there is high expectation and you don't achieve it, you don't have to beat yourself up about it, or feel 'not good enough'. Some humans who do this end up either trying to achieve at any cost or they shrink from any challenge in fear of possible failure. If we give that message to ourselves, (as the experiment shows us), it means we are passing that message on to our horses. We are making slight, (or not so slight) unconscious decisions and behavioral changes that can limit our and our horse's performance.

At the very least, do your best not to limit those around you by labeling them as incapable. Even if you don't say anything, you are probably going to subconsciously behave differently around them. Everyone deserves the best chance they can have. It won't hurt to entertain the possibility of their magnificence! So go ahead and think of your horse as the super star he is! Be bold and humble and vulnerable! 'Expect a lot, accept a little, reward often' is repeated by horsemen through the ages. You could also think of it as 'imagine the best, be happy with one step of progress, and be gentle with yourself along the way'. (<-- Tweet That!)...  Play with your horse as if there really is a Sweet Spot that is achievable in every moment. Know you can find it. Simply do your best. Go ahead an label your horse a champion. After all, it's scientifically proven to work!

Here is a link to the radio program: How To Become Batman 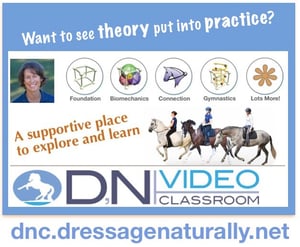 SEE ALL THE VIDEOS