Helping A Horse With Shivers

I was given a very lovely young warmblood who I was told (after they gave him to me) was diagnosed with shivers.

For those not familiar with shivers it is a rare, progressive neuromuscular disorder of horses. It is characterized by muscle tremors, difficulty holding up the hind limbs, and an unusual gait when the horse is asked to move backwards. Shivers is poorly understood and no effective treatment is available at this time.

Since the making of the video below I have now come to understand that he may not have 'true shivers' but rather standing hyperflexion as he is able to back up fairly normally (although it is pretty sticky). Regardless, the aberrant behavior he showed when asking him to lift his leg made handling the feet for picking, trimming, and shoeing very difficult and stressful, in the same way it does for horses with shivers.

I wanted to find a way to make this daily activity easier and safer for him and us. The process I show in the video has also helped horses with 'true shivers'. I hope in sharing this it will help others.

Some things I noticed with Teo:

So I thought: If he could do that, why couldn't he pick up his leg normally for trimming/picking out?

Here's what I then did (you can see this process in the video below):

First we practiced this in an area he didn't associate with picking his feet out. We moved out of the grooming stall. We found he was more relaxed and did less bracing in anticipation.

I taught him the cue for picking up his front feet so he understood the idea. We did this with a light touching of the leg while saying: 'lift' as the cue and positive reinforcement (treats!). He learned this easily.

I taught him the cue for picking up his back feet but noticed that if I was standing in the position I would be in to pick out his back feet it would illicit the hyperflexion, abduction, shaking, and loss of balance. When I cued him to lift his back leg using a long stick and standing near his head, he was able to do it much better! Yay - something to build on!

Once he got good at lifting the hind leg normally, calmly, and in balance we gradually introduced another person approaching the position of picking up his back leg, while I still gave the cue from the front. Each time we moved closer, the old hyperflexion returned, until he trusted (we guessed) that that person was not going to grab his leg.

Eventually the cue could be given by the person at the hind end and he would lift his leg normally.

All along the way, we found that touching his leg with our hand caused the hyperflexion. It was really important that we let him decide to lift the leg on the cue, then added that we could touch the hoof while in the air without grabbing it.

When he let us do that, we then were able to put our hand on the front of his pastern or hoof and let him drop his weight into our hand at whatever level he chose.

Eventually he was able to let myself or my assistant handle his legs for picking out/trimming without hyperflexion, from the normal position, in the grooming stall. The key still is to let him pick his leg up from the cue, and not try to grab or lift it ourselves.

This has greatly reduced the stress of handing his feet, for us and him! If you watched him now, you would not know there is a problem.

We found that trust and calmness were key

This video is a summary of the stages it went through. The whole process shown here took weeks of being very aware of his thresholds and not going faster than he allowed us to.

I hope this helps anyone else with a horse with this condition. It took some time to change this pattern, but it was really worth it. 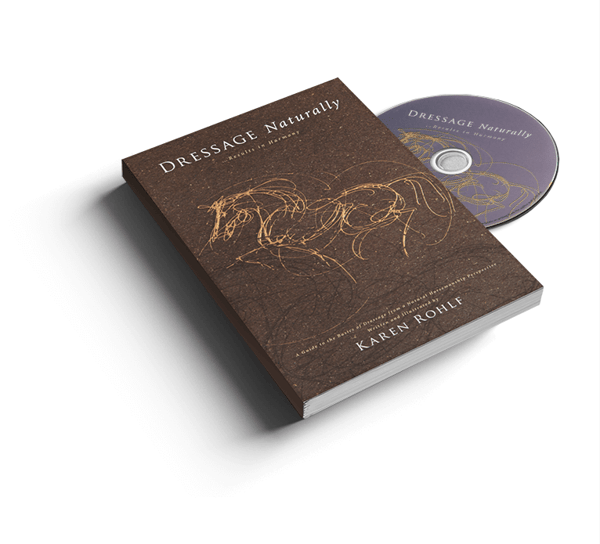 Theory, Exercises + 3 hours of DVD!
Get The Book